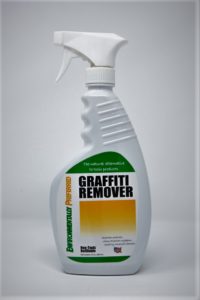 Many recent protests have left public places marred by spray painted slogans and an Iowa-based company is helping clean it up, in locales ranging from Old Capitol in Iowa City to the Walk of Fame in Hollywood.

“The user either sprays it on and depending on the surface, it can be wiped off with a rag or a towel,” Gard says. “Several places that are using our product right now are spraying it on, letting it sit for 10, 15, 20 minutes, and they’re using a high-pressure sprayer to take it off.”

The product is designed to remove spray paint from nearly any surface, including brick and concrete.

Gard says their clients include the City of Los Angeles which used it on the L.A. Post Office and along the Walk of Fame, while others are much closer to home.

“The City of Iowa City, a couple of weeks ago with all the situation going on there, has purchased a substantial amount of our product,” Gard says. “That’s what they’re doing, cleaning up all of the graffiti that’s been tagged on all the local municipalities and the statues and everything.” The University of Iowa is also a client.

The company uses soybean oil in a host of industrial products, including a paint stripper, a concrete sealer and a highway joint compound.