You are here: Home / Agriculture / Governor approves tax break for higher blends of biofuels like E15, B20 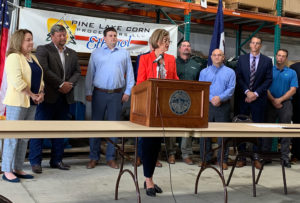 Governor Kim Reynolds has approved legislation that reduces the state tax on gas with an ethanol blend of 15 percent or higher. It applies the same six-cent per gallon break to 20 percent or higher blends of biodiesel.

“It’s going to make higher blend biofuels even cheaper at the pump, making it an even more appealing option for consumers,” Reynolds said. “That’ll drive demand for home-grown renewable fuels which is good for Iowans, our farmers and, of course, our Iowa biofuels industry.”

Reynolds held a bill signing ceremony early this morning at an ethanol plant in Steamboat Rock. The governor also announced plans to use $7 million in federal stimulus funds for grants to gas stations that install pumps that can dispense higher blends of biofuels. 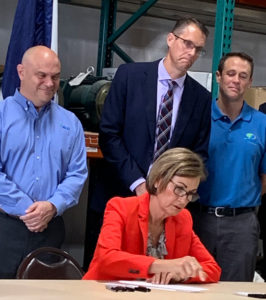 “That is in addition to the $3 million that is in the state budget, making it a total investment of $10 million in our renewable fuels infrastructure program,” Reynolds says, “which will help us drive consumption at pumps across the state.”

A small group of Black Lives Matter activists from Des Moines drove 90 minutes north to protest outside the plant Reynolds visited. The group has been calling on Reynolds to immediately issue an executive order that restores voting rights to released felons.