You are here: Home / News / Soldier crossing state on foot to call attention to mental health 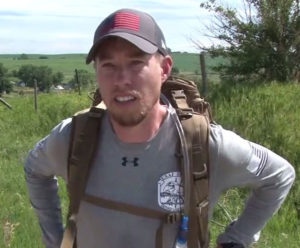 A soldier from the 185th Air National Guard in Sioux City is walking across Iowa from border to border to raise awareness about mental health.

Technical Sergeant Jeff Campbell is on a 20 day, 389-mile journey that started in Clinton and will end back in Sioux City.

“Twenty days? Nothing compared to someone who is suffering with depression for six months, someone who is legitimately struggling with a marriage,” Campbell says. “…We need to teach people that these bubbles of time are not permanent. You only do that by talking, by relating, by sitting down, having conversations.”

Campbell works as what’s called a “Survival, Evasion, Resistance, Escape” specialist for the 185th and he says issues concerning mental health affect everyone, plus mental health is a particular concern during these times of social distancing and isolation because of Covid-19. 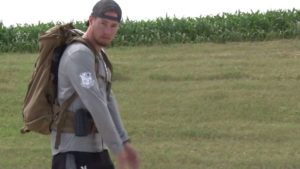 “I’ve had a lot of people stop and talk to me about what I’m doing,” Campbell says. “I had a lady open up to me about a son that had died because of suicide and just the other day I walked with a guy who was Vietnam vet for five miles and he was just talking about his struggles.”

Campbell says mental health is a particular concern during these times of social distancing and isolation because of Covid-19. And he says it’s an issue in rural as well as urban Iowa.

“It’s actually eye-opening talking to just different farmers and stuff and then just how they struggle in their suicide rate among their own community. You can’t escape it,” Campbell says. “It doesn’t matter where you re in the world, like, if you’re struggling mentally you have to be able to step outside of that…and be able to say: ‘Hey, this isn’t going to be forever.'”

According to the National Alliance on Mental Illness, 600,000 Iowans live with some form of mental illness.