You are here: Home / Fires/Accidents/Disasters / Awareness program targets new and expecting mothers for seatbelt use 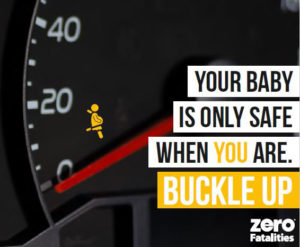 A campaign is now underway to remind new and expecting mothers to use their seatbelts.

Iowa Department of Public Health nurse clinician, Stephanie Trusty, says they developed the campaign after seeing a concerning trend. “We do review all the deaths that occur during pregnancy and for a year after the birth of a baby,” Trusty explains. “And in our last review, 18% of maternal deaths were from car crashes.” Seventy-one percent of the women who died in those crashes were not wearing a seatbelt.

She says there could be a variety of reasons why pregnant women don’t buckle up. “Some women think that it might be a little bit uncomfortable — although the seatbelt should go beneath their pregnant abdomen like at the hipline just like normal. And I think some people think — well if the airbag deploys — that would harm the unborn child. That is really not true,” according to Trusty.

She says the message for mothers is to buckle up.  “The safest thing that you can do to protect yourself and your unborn child is to wear a seatbelt. That’s the best way you can reduce injury and prevent being thrown from the vehicle,” she says.

Trusty says the deaths among mothers with newborns are likely because they got busy and didn’t buckle up. “Maybe the baby is crying — so whoever is driving pulls over — the mom gets into the back seat to attend to the baby and they take off without her being restrained. Unfortunately then if there is a crash or rollover, then she is thrown from the vehicle.”

Trusty says they are partnering with the Department of Transportation, Zero Fatalities, the Governor’s Traffic Safety Bureau and Safe Kids Iowa in a statewide social media campaign “Targeting young women to help more of them understand how important it is to buckle up every time they get into a vehicle, whether they are driving or riding in the car,” Trusty says. “We are also getting a brochure out to health care professionals encouraging them to talk to every pregnant woman about seatbelt safety during pregnancy.”

Trusty says it’s the nature of a mother to think about their kids first — but they can’t forget their own safety.
“Sometimes moms put themselves last — and it’s equally important that they are buckled up,” she says.

The program targeted at mothers runs through September 30th. Trust says everyone is reminded to always use seat belts when driving or riding in a vehicle.