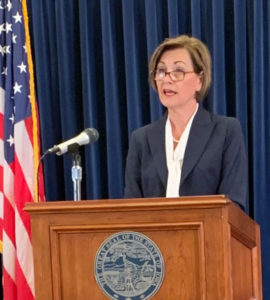 “Businesses would have paid more in unemployment insurance taxes, so that there would be money in the Unemployment Trust Fund to pay unemployment claims,” Ralston says.

If the balance in the state’s Unemployment Trust Fund runs low, the taxes business pay into the fund are increased.

“I think it’s too early to say whether this is a one-time thing or whether there will need to be additional money,” Ralston says. “but it’s a huge effort to try to stop that from happening.”

In a written statement, Reynolds said she decided to use federal CARES Act money to minimize the pandemic’s impact on businesses, so they can focus on “growing and reinvesting” rather than paying more taxes.

Iowa’s unemployment rate in May was 10 percent.