You are here: Home / Agriculture / Crops in some areas of the state showing signs of stress 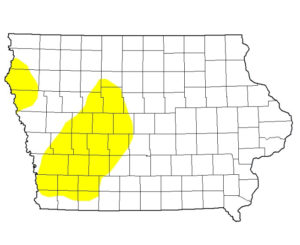 The U.S.Drought Monitor map shows some areas of extreme drought.

The new varieties of corn have made the old standard “knee-high” by the Fourth of July a thing of the past as corn in some areas is already five to six feet high.

Iowa State University Field Agronomist, Angie Rieck-Hinz says the differences in rainfall are really starting to show in her north-central Iowa area. “We can certainly tell where the drier than usual places are — because the corn is starting to get that pineapplely look in some places and it is starting to happen early in the day. Which just means between the heat stress and lack of water — that crop is under stress,” Reick-Hintz says.

She says Webster and Humboldt counties are good examples of drier area, as Humboldt County is almost five-and-a-half inches below its normal rainfall going back to April. “So, you can definitely see that stress in the crop. And as we get hotter this week, that will probably continue to worsen.” Those crops show the pineapple effect she talked about as their leaves curl up. But Rieck-Hintz says other counties are doing pretty well.

“You get into eastern Hamilton County, you get in Hardin County, Franklin County, where they had a few more rains not that long ago, that crop still looks really good right?” Rieck-Hintz says. “We don’t see that leaf rolling in the morning or as early in the day. But, this is going to be a big week for heat and doesn’t sound like we are going to get a lot of rain.” Reick-Hintz says she is seeing some tassels starting to appear — which is a sign the corn is advancing it its development.

The soybeans are also making progress. “We have beans which are almost to R-3, which means beginning pod. So they are starting to set pods on there and pretty soon there will be little beans. There are little beans in the little pods —
so that’s awesome,” she says.

Rieck-Hintz says getting enough moisture is the biggest issue facing the development of both crops right now. “We don’t see a lot of disease pressure out there in corn or soybeans,” she says. “We don’t have a lot of insect activity going on.” The latest U.S.D.A. crop report on the condition of the crops will come out later today.