You are here: Home / News / Bruno, the bear, made it all the way to the St. Louis metro 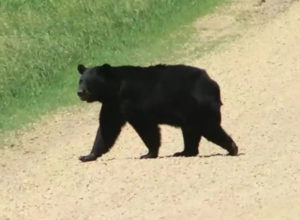 The bear when it was in eastern Iowa. (KCRG TV photo)

The bear that captured attention as it wandered through eastern Iowa last month attracted more crowds in Missouri.

Almost 150,000 people have joined the Facebook group “Keeping Bruno Safe” which has been chronicling the adventures of a black bear that left Wisconsin and ended up in Missouri.

After becoming trapped by 10 foot high fences close to I-70 near Wentzville; the exhausted and dehydrated Bruno was tranquilized and taken to a safer, undisclosed location.