You are here: Home / News / Iowa Lottery expected to hit budget goals, but not records

Neubauer says they won’t match the $390.1 million record once all the numbers are totaled — but they will meet some key marks.
“In 2020 with COVID-19 and everything else that has been going on — we will not meet the record levels we hit in 2019. But we are on track to meet the budget goals that we have stated for state lawmakers, for state budget analysts and for ourselves,” according to Neubauer.

The sales for the last fiscal year increased by more than 5% — driven by a couple of jackpots for Mega Millions and Powerball that each went above half-a-billion dollars at the same time. Neubauer says a slow year in lotto sales got even slower once the pandemic hit.

“Lotto game sales were already down for the year before all of that started, simply because the jackpots in Mega Millions and Powerball had been won more often at a lower level,” Neubauer explains. “So we just hadn’t seen the jackpots climbing into the stratosphere like we had in the last couple of years.”

Powerball sales through may were down 17 million dollars compared to the previous year and Mega Millions sales were down 16 million. The Iowa Lottery’s first-ever product continued to do well as other ticket sales lagged during the pandemic shutdowns.

“Scratch games continued to do really well. And I think that goes hand-in-hand with what we are seeing around the country in terms of the entertainment options that people have been using in general,” Neubauer says. “You’ve heard that puzzle sales are through the roof. Board games are becoming hard to find because people are looking for those hard copy entertainment options in addition to the electronics that they’ve been using — and scratch tickets were part of the mix for folks.” 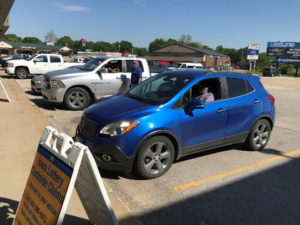 Scratch ticket says were up by $4.4 million through May. The Iowa Lottery turned over nearly $93 million in profits to the state in that record sales year. Neubauer says they are still on target to hit their projected $72 million in proceeds for this past fiscal year.

“That’s really saying something in a year like this that we’ve been able to stay on track and meet those budget goals. We know that revenue to state causes is really more important now than ever — and we are really proud of the fact that we have been able to achieve our budget goals for this year,” Neubauer says.

The Iowa Lottery had to adapt several of the ways it does business during the pandemic. That included no in-person prize claims.
She says they are doing the in-person claims again on a curbside basis where they have the winner fill out the information and then go inside and process it before bringing a check out to the winner. With the uncertainty remaining on what will happen with the COVID-19 outbreak, the Iowa Lottery has approved a budget that projects an increase in revenue of around nine million dollars in this new fiscal year.