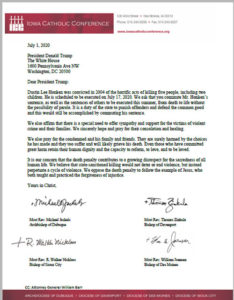 Dustin Honken, who was originally from Britt, was convicted in 2004 of murdering a family in a rural area outside of Mason City in 1993. Authorities say Honken was a meth kingpin at the time and the man he murdered was another drug dealer who had become an informant.

Honken shot the man, his wife, and two children in the head.

The bishops say they believe capital punishment perpetuates a cycle of violence and contributes to a growing disrespect for the sacredness of all human life.