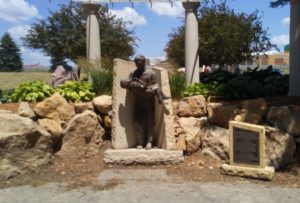 The parks director in Sioux City says damage to the Flight 232 memorial on the city’s riverfront was caused by nature — not vandalism.

Two pieces of the monument have toppled over and parks director Matt Salvatore says there are underlying issues in the area.

“The Flight 232 memorial was underwater last year with flooding. There is a utility issue in there — so the issues that we are having are not necessarily linked to the flooding that occurred last year,” Salvatore says. “There seems to be a utility issue in the area so the sidewalk leading to the monument snapped in about four different places.”

The monument celebrates the heroic efforts by the community when a damaged United Airlines plane crashed at the Sioux City Airport on July 19th in 1989. There were 112 deaths in the crash — but 184 people survived.

Salvatore says the city has been assessing the damage and what they need to do to repair the monument. “Our staff removed the sidewalk, relocated some of the stones along the walkway. Relocated those out of the way,” according to Salvatore. “The sidewalk itself was replaced with fill. And we’ve been keeping an eye on it. The fill continues to settle.”

He says they are working with the utility department to fix that issue. “Once we locate the problem, we are going to pack that area, pour back the sidewalk, relocate all the stones, and we are going to do some landscaping repairs from the flooding last year. We are going to have everything back in order by the anniversary date of 232.”

The monument features a sculpture of Lieutenant Colonel Dennis Nielsen of the 185th Air National Guard carrying young Spencer Bailey from the crash wreckage. A photo of Nielson carrying Bailey from the wreckage gained nationwide attention.