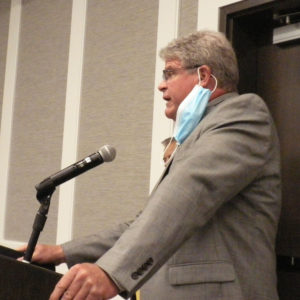 The director of racing at the Prairie Meadows Casino in Altoona says they have seen a big increase in offtrack betting on their races during the pandemic.

Darron Heldt says the offtrack betting really took off as soon as they got the horses running again. “You know if we bet three million through the first 12 days last year — we are showing we’ve approximately doubled that — they bet six million,” Heldt says.

He says horse racing fans are fans of other sports and with all the major sports shut down — there hasn’t been much for them to do. “I think those people are looking for something to bet on. And I think horse racing is an option for them,” according to Heldt. ” It has played out through March when this all took place. Other race tracks had to make adjustments whether they were running or not running yet. But those that were running were seeing increases with no spectators.”

Heldt says the increased offtrack betting on races helps their financial situation — but they make less money on those bets than they do for wagers made at the track. He says the number of people coming to watch races in person has not matched the increase in offtrack betting.

“What I am seeing visually is that people want to be outside and watch the races. So our apron outside.. we had good crowds opening weekend. Up in the clubhouse where its inside and the tables were, there was less activity up there with people wanting to be outside,” Heldt says. “The first weekend I thought we had great crowds — and then it has just kind of diminished over the next two weekends that we’ve raced.”

Heldt says getting racing running again is going to help the support businesses. He says the ripple effect will be greater because they are running more horses with the thoroughbreds and quarter horses together. They have around 1,233 horses there –which is around 130 more horses than last year.

Heldt says he will know more about how they are doing financially at the end of this month.