You are here: Home / Sports / Renovations underway at stadium for the Sioux City Explorers 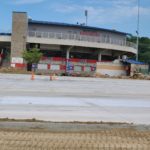 When the Sioux City Explorers return to American Association action next summer there will be a new look to Lewis and Clark Park and Mercy Field. Explorers’ marketing director Connor Ryan says the box office and fan shop were demolished this week to make room for new offices.

“The box office had been there since 1993 and really needed a renovation”, said Ryan. “It was really small and kind of outdated compared to the rest of the American Association.”

The Explorers called off this season due to COVID-19 and Ryan says that allowed renovations to begin early.

“This was supposed to begin at the end of the season”, added Ryan. “The way we have it now it should be done by October or November.”

Ryan hopes the new souvenir shop is open for the holiday season.