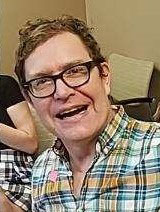 The search for a former Wartburg College music instructor who walked away from a long-term care facility in Waterloo late Monday night is entering its third day.

A police report says 46-year-old Michael Jensen escaped Ravenwood Specialty Care through a window and walked away late Monday night. According to family and friends, Jensen has a brain tumor that causes confusion, slurred speech and dementia.

Nearly 70 volunteers joined authorities in a search of the neighborhood around the care facility on Tuesday. The search was moved north to the Janesville area Wednesday after authorities received two reports of a possible sighting of Jensen near the community.

Jensen is described as a five-foot, 10-inch white male who weighs around 180 pounds. He was last seen wearing gray sweatpants, a plaid button-up shirt and black-framed glasses. Anyone with information regarding Jensen’s whereabouts should call Waterloo police at 319-291-2515.