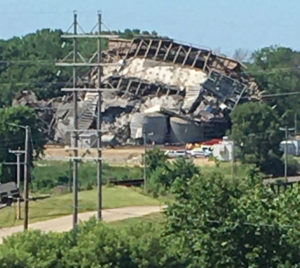 The plant after implosion.

Mississippi River boat traffic and air traffic over the river were diverted as an Alliant Energy power plant in Clinton was imploded today.

The plant in Clinton started as a coal-fired plant more than 70 years ago. It was switched to natural gas in 2015 and Alliant announced it was closing the plant in 2018 — six years earlier than originally planned. The company said the move to wind power and other renewables eliminated the need for the plant.

The plant had employed about 20 people.

Here’s Alliant video of the implosion: