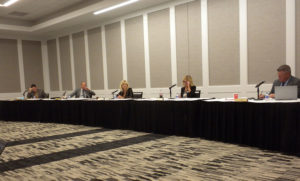 The Racing and Gaming Commission during their meeting Thursday.

The administrator of the Iowa Racing and Gaming Commission says revenues for the fiscal year that ended in June are down about 20% after the shutdowns forced by the coronavirus epidemic.

Brian Ohorilko says the governor ordered casinos closed March 17th and weren’t allowed to open until May 31st. “Those months that were closed really did have a significant impact. Up until the pandemic, the industry had been doing really well. I think some of that could be attributed to the impact from sports wagering,”Ohorilko says.

Casinos were allowed to start offering sports betting at the end of September last year — and most had their operations up and going as the new year started.  He says 20 percent is a significant drop in revenue — and had it not been for the good first and second quarters the loses could have been more.

The report released Thursday showed gross casino revenues for the fiscal year were $1,163,416,237 dollars — a drop of almost $300 million from the last fiscal year. Ohorilko says things have not gotten back to the levels they were before the COVID-19 outbreak.

“We have seen admissions down — but spending was up in a number of casinos — especially in eastern Iowa. Those casinos had some of the best months they’ve had in a long time,” according to Ohorilko. “But I think a lot of that could be attributed to Illinois still being shut down and people that are interested in gambling coming to Iowa to do that.”

Ohorilko says it is still not clear how much the industry will rebound and when. He is sure that the state-licensed casinos are not in any trouble of closing. “At this point, there really is no concern about them being viable. All 19 casinos were able to if they had debt, able to get help servicing that debt,” he says.

Many of the casinos have re-opened with less staff due to restrictions on the capacity that are still in place to prevent the spread of COVID-19. Ohorilko says the measures taken by casinos have led to more efficiencies in operation — and that could be a positive as they move forward.

“They are using technology to help cash gaming tickets, to exchange chips, so it’s really just the implementation of technology to help automate some of the processes that normally would involve human contact and hand-to-hand touch. So we are seeing some of that right now,” Ohorilko says.

The state reported it saw a drop of $64.5 million in gambling tax revenue brought on by the shutdown