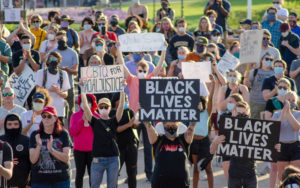 Des Moines Black Lives Matter activists are proposing their own language for an executive order to restore felon voting rights as they continue to pressure Governor Kim Reynolds to act.

“After giving Reynolds nearly a month to produce an executive order, which she promised to sign, BLM is taking action,” organizer Ellie Odole said at a protest this weekend. “We will not accept such a lack of urgency and disregard for disenfranchised Iowans.”

The group’s proposal would restore voting rights to all Iowans with felony convictions after they get out of prison. In January of last year, Reynolds proposed restoring voting rights to those who complete their sentence and last month she promised to issue an executive order on felon voting rights before the November election. Reynolds has supported a legislative plan requiring payment of all victim restitution, but she hasn’t publicly revealed what she’ll include in her executive order.

Representative Ras Smith, a Democrat from Waterloo, worked on the language the Black Lives Matter protesters have proposed. It would go further than the last time a governor restored voting rights in Iowa — and restore voting rights to Iowans after they get out of prison, instead of also requiring completion of probation and parole.

“It gives the largest number of people restoration of their rights to utilize their voice,” Smith said after this weekend’s rally. “That’s what we believe in.” Every day Smith tweets the number of days since Reynolds promised to issue the executive order — and the number of days until the November 3rd election.