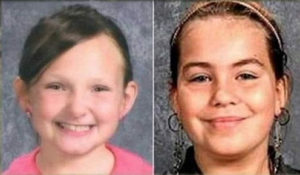 Eight years ago — July 13, 2012 — cousins Elizabeth Collins and Lyric Cook-Morrissey disappeared while riding their bicycles in the Waterloo suburb of Evansdale. Hunters discovered their bodies five months later in a secluded section of the Seven Bridges Wildlife Area in Bremer County, almost 20 miles away from the lake near where their bikes were found.

Collins, of Evansdale, was eight years old when she died. Cook-Morrissey, of Waterloo, was ten. Authorities believe both girls were abducted and murdered by someone, whose identity remains unknown to this very day. Investigators remain hopeful that someday they’ll be able to determine who committed the crime. Cedar Valley Crime Stoppers is offering a $50,000 reward for information leading to an arrest.