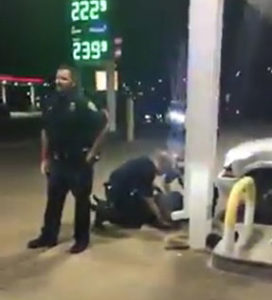 Screenshot from video of the arrest.

Video of a weekend incident involving a black man and Dubuque police is now on social media and has led to an investigation.

Dubuque’s city manager says a thorough investigation will be done after the video was posted on Facebook by the group “Dubuque In Pursuit News.” It appears to show the man having a seizure and struggling to breathe. Reports say he had been pepper-sprayed and handcuffed by Dubuque police on Friday night after resisting arrest.

A crowd quickly gathered and several people shot video on their cell phones.  One video shows the man on the ground at a gas station near the pumps with two officers attending to him and a third officer motioning to keep onlookers back. The person shooting the video, and others, shout at the officers, urging them to help the man.

Police say the man, identified as 41-year-old Yoosuf Moment of Dubuque, was treated at a local hospital and released after being ticketed for driving without a valid license and interfering with police. The city says footage from dashcams, body cams, and videos taken by the public will be reviewed.