You are here: Home / News / Parts of the state in need of rainfall 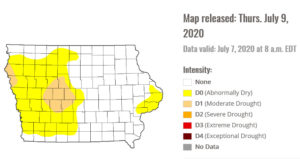 The recent U.S. Drought Monitor report shows abnormally dry conditions in about 35 percent of the state, with eight west-central counties classified as being in moderate drought.

Iowa DNR analyst Tim Hall says the state remains split when it comes to water conditions. “You almost can draw a north-south line along Interstate 35. And to the west of the interstate in the last month — those areas have been short of rainfall. And on the east side of I-35, we’ve had excess rainfall,” Hall says. While parts of the state are characterized as dry — Hall says there are two different ways to look at it.

The other type of drought impacts more long-term water needs. “For drinking water for groundwater. So, we’re concerned and we are watching it, but right now the impacts are primarily agricultural. But if things don’t improve, then we’ll start to see those impacts move into other parts of the system,” Hall says.

He says not all rain will help get rid of the dry conditions. Hall says we often get thunderstorms this time of year that dump big amounts of rain and that tends to run off the ground quickly, and is not as helpful to crops. He says a slow, steady rain would be the most helpful right now. Hall says the longer the drought continues, the more you have to worry about the time it takes to come out of it.

“Drought conditions typically are a long time building up — they don’t come generally very quickly. And on the other side of the coin — to move a drought out of the state doesn’t come in one rainstorm — typically it takes a prolonged period of wet weather,” according to Hall. Hall says the rains can also be sporadic this time of year and help one area agriculturally — while leaving another area still in need of rain.