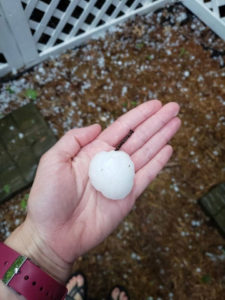 You know it’s a bad storm when the National Weather Service staff has to abandon its office and take shelter underground.

Severe thunderstorms rolled across central Iowa last night, bringing winds up to 60 miles-an-hour in the Des Moines area, along with two-inch diameter hail and heavy rain.

Meteorologist Frank Boksa, at the Weather Service, says it was a very active evening.

“We had a funnel cloud reported near Boone around 6:40,” Boksa says. “There were only a couple reports of what I would consider very large hail, Grimes and Ankeny. Several locations had trees down, Windsor Heights and the town of Saylorville. Numerous reports of quite heavy rain, two-to-four inches of rain.”

There were multiple reports of “rotation” seen on radar, a possible indicator of a tornado, but no twisters are confirmed. Boksa says their Johnston office had to be evacuated for a short time as a particularly nasty storm cell approached. 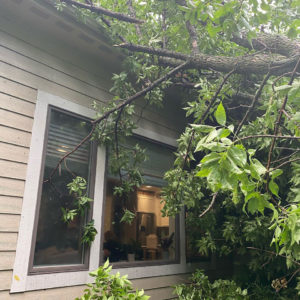 “It did have a tornadic signature to it so the people who were working here during the evening took cover as the storm passed over the office,” Boksa says. “We have a storm shelter that we go into.”

While the Des Moines office was temporarily closed, forecasting duties were shifted to the National Weather Service bureau in the Quad Cities. Skies are grey across much of Iowa this morning but Boksa says the immediate threat of more severe weather is over.

“We’ll see some thunderstorms through the morning, diminishing in the afternoon,” Boksa says. “The severe threat is really passed. It’s more of a heavy rain threat now.”

Multiple power outages were reported and damage, primarily to houses and trees, is also reported in Pella, Sandyville, West Des Moines and Urbandale. No injuries are reported. Keep up with the changing forecast at weather.gov.