You are here: Home / News / Hospitalizations for COVID-19 up 22% this month in Iowa 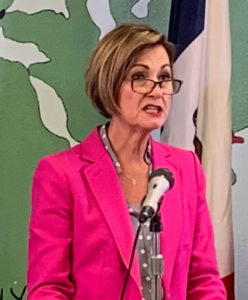 The number of Iowans hospitalized for treatment of COVID-19 has been on a steady uptick this month. As of 10 a.m. today, 190 Iowans are hospitalized, up 22% since July 1st.

Governor Kim Reynolds said yesterday that the majority of total positive cases this month are concentrated in 10 of Iowa’s counties — and among younger adults.

“We know where the positive cases are occurring and why and we’re carefully considering whether additional targeted mitigation efforts are necessary to slow the spread in some areas,” the governor said during her weekly news conference.

The average age of those testing positive for the virus was 63 in March, when the first cases were confirmed in Iowa. This week the average age has dropped to 39. Reynolds has made it clear she may re-impose some restrictions on bars as a result of the increase in confirmed infections among young Iowans.

“You will not see me shut down the entire state,” Reynolds said. “We know where the increases are taking place. We have some idea of what we believe it may be tied to and so we will target our response based on the information that the Department of Public Health and the epidemiologist team is collecting.”