You are here: Home / News / You can stay up late or get up early and see a comet in the Iowa sky 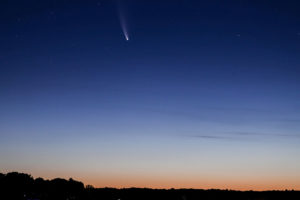 The NEOWISE comet is visible in the Iowa sky. (Photo by Lynne A. Kasey)

The manager of the University of Iowa’s Van Allen Observatories says if the clouds clear, Iowans should take advantage of a very rare opportunity to see a comet this week.

Caroline Roberts, who also coordinates the U-I’s Astronomy Laboratory, says to spot this spectacle in the sky, you’ll either have to stay up late or set the alarm to get up early.

Its full name is Comet C/2020 F3 NEOWISE or just NEOWISE for short. The comet gets its name from the orbiting NASA space telescope which discovered it, called NEOWISE, for Near-Earth Object Wide-field Infrared Survey Explorer.

If you want to see the comet, you’ll have to be looking in the right place — low on the horizon, depending on when you venture out.

Unlike a meteor, which makes a fast, bright streak across the sky, the comet will appear stationary and you don’t need any special equipment to see it.  “Using binoculars, using a telescope is going to improve your view of the comet, but it can be seen with the naked eye,” she says. “It’s just going to be a faint, fuzzy point in the sky.”

Binoculars or a telescope should help reveal the comet as a bright spot in the dark sky along with its trailing white tail. By next Monday or so, the comet will appear to rise higher in the nighttime sky, while it will become impossible to see in the early mornings. NEOWISE is a fairly large comet, about three miles across.

Chicken Little can rest assured, the sky isn’t falling, and Roberts says this distant, icy ball will not threaten life on our planet. “We know exactly where it’s going and we know what its path in the sky is going to be,” Roberts says. “While it is traveling between the sun and the Earth, there’s no risk of it encountering the Earth. It’s going to pass by us very, very far away.”

NEOWISE is considered a long-period comet, which means it won’t be back around for about 7,000 years.