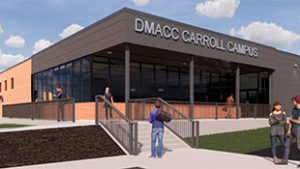 Work is underway on a $4.2 million expansion of the Des Moines Area Community College campus in Carroll.

Provost, Joel Lundstrom, says the expansion helps meet a need for more classes and space. “The project is 11,700 square feet and two labs. A welding lab and industrial tech lab — and will primarily serve our welding students. We have a record number of welding students coming in this fall,” Lundstrom says. He says they will have 45 students taking welding classes throughout the day.

The building also gives them more space for other things. “A new event space community area for up to 145 community members for when we bring speakers on campus,” according to Lundstrom. “We often time bring speakers…we’ve had an astronaut, we’ve had a number of people speaking on diversity and inclusion the last couple of years, and just bring a lot of educational events into the community.”

He says the DMACC campus in Carroll has a wide reach. “We actually serve ten high schools with a career academy options for them to take concurrent enrollment classes while they are in high school with no cost to them,” Lundstrom says. “We ar an hour-and-half from Des Moines, an hour-and-half from Omaha, kind of right in northwest Iowa and we serve a pretty big region.”