You are here: Home / News / State patrols in Iowa and four other states look to cut excessive speed 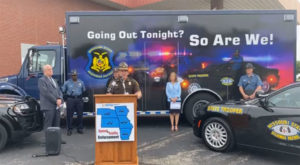 Colonel Fulk at a news conference in Missouri.

The leader of the Iowa State Patrol joined his counterparts from Missouri, Kansas, Nebraska, and Arkansas to announced a joint effort to crack down on excessive speed.

Colonel Nathan Fulk spoke about the issue today at a Missouri Department of Transportation facility. “Law enforcement is seeing a significant increase in excessive speed across the midwest related to the pandemic,” according to Fulk. “We’ve seen reduced vehicle miles traveled producing less congested roadways and creating a driver perception that law enforcement isn’t out enforcing traffic laws.”

Fulk says the number one concern in each state is the safety of drivers. “Speeding is the number one causation factor in crashes. They are preventable. Ninety-four-percent of crashes are driver related,” according to Fulk. ” During the month of July, we will be working in collaboration with our state police partners and local law enforcement agencies to raise awareness on this concerning trend that has a negative impact on traffic safety.” He says they will use a variety of methods to try and educate the public.

Troopers in the five-state area are collaborating with the National Highway Traffic Safety Administration for a speed enforcement initiative Friday and Saturday (July 17-18). The initiative is aimed at reducing high speeds and encouraging personal responsibility in keeping roadways safe.