You are here: Home / News / Balltown first in Iowa, second in U.S. to have 100% response to Census 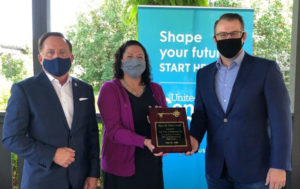 A small northeast Iowa community is the first town in Iowa to have every single household respond to the 2020 Census. Balltown is just the second town in the entire United States with a 100 percent response rate.

Balltown Mayor Sherri Sigwarth says the goal to get all 73 of Balltown’s residents counted began months ago when a Census representative visited a meeting of all the mayors in Dubuque County.

“When the Census Bureau person was talking, I was like, ‘Oh, we can do that. We can reach 100%,” she says. “And a few weeks later is actually when I really thought about it, I checked our Census rate — because you can actually look at the response rate per city — and we were at 87%.”

Sigwarth sent a mass text to people in her community with information about responding.

Sigwarth acknowledges getting every person counted in a community with 73 residents may be easier than in bigger cities, but with some help from a restaurant in Balltown that’s been operating since 1852 — she’s got an incentive.

“Breitbach’s Country Dining is offering any mayor in the state of Iowa that reaches 100% self-response rate — if they dine in, they will receive a complimentary piece of homemade pie.”

Sigwarth says participating in the Census is important.

“The response rate actually lets Iowa get their fair share of representation in congress and also the Iowa Legislature,” she says. “And also it lets Iowa or even our communities receive our fair share of funding for like roads, schools, health care clinics, fire departments.”

Lieutenant Governor Adam Gregg and Secretary of State Paul Pate were in Balltown yesterday to mark the city’s milestone as first in Iowa with a 100 percent response rate to the Census.