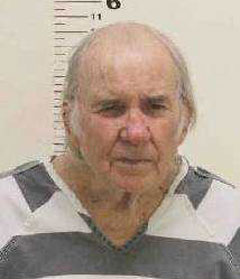 A northwest Iowa man who was jailed after a fatal shooting two months ago now faces more serious allegations.

Eighty-two-year-old Thomas Knapp of rural Merrill now faces first-degree murder charges. Deputies were called to the Knapp residence on May 11th for a report of a shooting incident. That shooting resulted in the death of 51-year-old Kevin LeRoy Juzek.
At that time, Knapp was charged with domestic abuse assault while displaying or use of a weapon.

The Plymouth County Sheriff’s Office and County Attorney’s Office have continued their investigation into the death. Recently, the final autopsy was received by the Iowa State Medical Examiner. That report confirmed the preliminary findings of determining the manner of death to Juzek as homicide and the cause of death were gunshot wounds to the abdomen and upper torso of the victim.

The investigation showed that on May 11th, Knapp willfully and deliberately and with premeditation did kill Juzek. According to the investigation report, Knapp fired a 20-gauge shotgun through a bedroom door striking Juzek. Juzek then made it to a living room area where Knapp fired a second shot to the chest of Juzek.

Knapp was taken into custody on May 11th and remains incarcerated. Judge Vakulskas issued a warrant for Knapp. He is still being held without bond at the Plymouth County Jail.