You are here: Home / News / Get ready for a blast of weekend heat 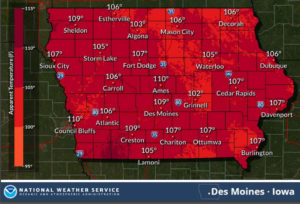 After a brief break from muggy weather earlier this week, forecasters say Saturday will be one of Iowa’s hottest days of the year with high temperatures in the 90s and triple-digit heat indices.

Meteorologist Roger Vachalek, at the National Weather Service, says the heat will be stifling, and precautions should be taken to keep people — and pets — cool. “It’s going to be especially hot tomorrow,” Vachalek says. “Right now, we have a Heat Advisory in effect for basically the entire state. We do have an Excessive Heat Watch for a small portion of northwestern Iowa and later today, that may be upgraded to a warning.”

If you have to be outside, wear light-colored and light-weight clothing, wear a hat and take plenty of breaks for water. Otherwise, there’s a serious risk of heatstroke or heat exhaustion. The advisories extend through 8 p.m. on Saturday as he says the heat will be “oppressive.”

“We’ll be looking at high temperatures tomorrow in the low- to mid-90s throughout much of north, east and central Iowa and even some upper 90s across the western portion of the state,” Vachalek says. “That is going to push the heat indices to about 105 in the north and eastern counties and right around 110 from central over to western Iowa.”

A front is expected to arrive Saturday night and into Sunday that should bring much of Iowa a better chance for rain — and for cooler temperatures.  “Highs on Sunday should be in the 80s over the far north and we may still top off at 90 in the southern counties of Iowa,” Vachalek says. “Better news for next week. We have more chances for showers and thunderstorms and also temperatures back in the 80s. That will be welcome news for just about everybody.”