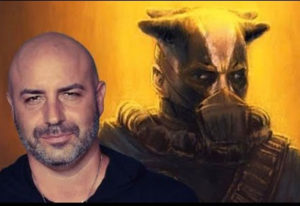 Dominic Pace and his character.

Star Wars fans got the chance to meet an actor from the hit TV series “The Mandalorian” over the weekend in Sioux City.

Dominic Pace, who plays Gekko the Bounty Hunter, appeared at ACME Comics & Collectibles for the store’s 8th Star Wars Mini Convention. Pace says a simple audition landed him what has become a career-changing role on the Disney-Plus network show.

“I’ve been a character actor for 20-plus years and this is kind of ironic in terms of the acquisition of this role, because it’s not necessarily an acting accolade,” Pace says. “I’ve been fortunate to book a number of guest stars and co-stars throughout the years but this was a simple makeup test. The relevance of it is just the fact that the Star Wars fans are so passionate about any new species.”

Pace says he’s been a life-long Star Wars fan and he hopes his Gekko role will be immortalized with an action figure. “This for me is more of a fan experience as opposed to an acting accolade,” Pace says. “I’m just hopeful that it will turn into a Hasbro or a Lego sooner or later. I’m just beyond words and trying ultimately to do some good with it, especially during this tough time in our country right now.”

Most of the fan convention events Pace was scheduled to attend this summer have been canceled because of the pandemic, so appearances at local comic book stores are a great way to connect with fans.  “I’ve been able to support small businesses through an over-9,000 mile journey throughout the United States, taking my 11-year-old son,” Pace says. “We’re already two weeks into it and we have another 20 stops along the way. The outpouring of support along the way has been amazing, not only from the fan base but also the inspiration of all these mom-and-pop stores.”

He made a stop in Fort Dodge last week before heading to Sioux City on Saturday, his only scheduled Iowa appearances on this tour.