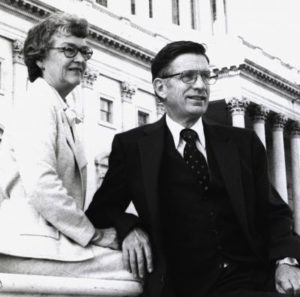 Friends, family, and community members will honor the late Congressman Berkley Bedell this weekend with an event on West Lake Okoboji.

Bedell, a businessman who served in Congress for 12 years, died in December at the age of 98. Tom Bedell, his son, said a memorial service had been planned this past weekend, but it had to be canceled due to the pandemic and a boat parade seemed the perfect tribute.

“There is hardly a day when dad was here in the Iowa Great Lakes that he didn’t go fishing every morning,” Tom Bedell said. “He would get up at 4:30 or five o’clock. He’s either put on his waders and go out on Fort Dodge Point or Pillsbury Point, Miller’s Bay — long before they had crowds that gather there. The lake was his soul if you could say that, so yes, this seems very very fitting.”

Berkley Bedell was a Spirit Lake native who founded a fishing tackle business after serving in the Army in World War II.

“My dad not only created his fishing company, but that’s truly who he was from when he was a kid,” Tom Bedell said. “He fished almost every day.”

Berkley Bedell tied fishing lures as a high schooler and sold them to earn money during the Great Depression. The parade is scheduled to start at 6 p.m. on Saturday on West Lake Okoboji, in front of the Arnolds Park Amusement Park. The Queen, an excursion boat with two decks, will lead the parade. The guests were able to hear pre-recorded messages from former Iowa Senator Tom Harkin and current Senator Chuck Grassley. Grassley, Harkin, and Bedell were all first elected to Congress in 1974.

“He was proud to call them both friends,” Tom Bedell said. “He looked at both of them as public servants even though their individual parties and philosophies might have been a little bit different.”

Bedell did not seek re-election in 1986 after being diagnosed with Lyme Disease. Bedell, a Democrat, remained active in politics after leaving Congress and endorsed Howard Dean in 2004 and Elizabeth Warren before the 2020 Iowa Caucuses.