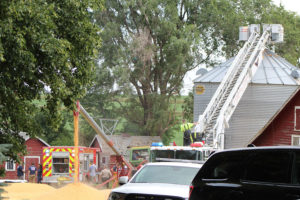 The worker who was killed in the Tuesday grain bin accident near Le Mars has been identified by the Plymouth County Sheriff’s Office as 65-year-old Daniel Cronin.

A 65-year-old man died in a grain bin accident east of Le Mars around 10 this morning.

Plymouth County Sheriff’s deputies confirmed the individual had safety measures in place, but was still pulled into the corn when the crust had broke.

The body of the victim was recovered about an hour after rescuers arrived as they needed to empty the corn that was being stored in the grain bin to assist with the recovery efforts.

The name of the victim is not being released at this time pending family notifications.