You are here: Home / News / Senator Grassley: more pandemic payments to Americans among issues being discussed 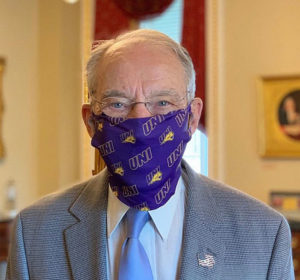 Congress is back in session after its summer recess and Iowa Senator Chuck Grassley says one of the top priorities is crafting another incarnation of the CARES Act to help businesses and individuals weather the continuing storm of coronavirus.

Grassley says direct payments of up to $1,200 to nearly every American are again being discussed, as are a host of other elements designed to stimulate the economy. “Our four previous bills to help with the pandemic, we’ve been able to come to a bipartisan consensus,” Grassley says. “Each of those bills passed with overwhelming support and the biggest one passed unanimously, and I hope this one will be no different.”

The original Coronavirus Aid, Relief and Economic Security Act was signed into law by President Trump on March 27th. It allotted a record $2.2 trillion  to address the COVID-19 pandemic. Grassley says there are many possibilities to consider for the next piece of legislation.

“Leader McConnell wants liability protection to protect folks from frivolous lawsuits that are related to the virus,” Grassley says. “President Trump has listed a handful of options that he wants Congress to consider and at this point, we’re only in a discussion phase.”

Grassley says hammering out the details of the bill will likely take two to three weeks though it has to be before President Trump by August 7th. Grassley, a Republican, says there’s been much conversation already about another cash infusion where Uncle Sam would send checks directly to most Americans.

“I think this is the one that gets the most economic impact if you’re thinking about stimulating the economy, putting money in people’s pockets,” Grassley says. “I’m not sure it’s going to be exactly $1,200 but it’s going to be a sizable amount of money if there are checks go out.”

The payment process would likely be set up much like the last time, he says, in order to expedite the checks. Otherwise, Grassley says, they may not arrive until after Christmas.