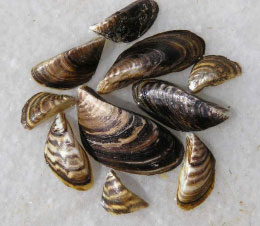 The Iowa Department of Natural Resources has confirmed an infestation of zebra mussels in Lake Manawa near Council Bluffs.

The DNR’s Kim Bogenschutz says a homeowner along the lake reported the find. “The size of these zebra mussels indicates that they had come in last year. They looked to be about a year old at least. So, they are adults and not brand new ones from this year — they probably arrived last year. Right now the infestation is very low,” Bogenschutz says.

She says the mussel growth was about what she expected. “That’s pretty normal for a new infestation. We’ll see how it goes — Storm Lake, East Okoboji, Clear Lake — those exploded right away the second year. And then there’s other ones like Cornelia, Spirit Lake where they hold back for a while before they really expand. We’ll just do monitoring and see what happens,” according to Bogenschutz.

She says 20 Iowa Lakes now have a zebra mussel infestation. The big issue is there is no way to stop the invasive species that can take over a lake. “We don’t have anything currently that would kill them that wouldn’t kill other invertebrates in the system,” Bogenschutz says. “There are certainly people who are working on it, really good researchers, and I think in the future we will have some things to at least lessen their impact, lower the population levels. But right now we are just trying to make sure they don’t spread from there to other lakes.”

Bogenschutz says it is important for boaters to clean off their boats and keep from moving zebra mussels or plant material that may contain them to other lakes. “But also, the small zebra mussels are microscopic and they float in the water for up to two weeks before they settle on hard things. So, it’s the water in boats, in your live wells or your bilge wells, in your ballast, that can hold zebra mussels too,” Bogenschutz says. “so if you are not draining your water and not cleaning everything off right away before you leave a body of water and go to another one lake, you could be transporting zebra mussels.”

Zebra mussels look like small, D-shaped clams that have alternating light and dark bands. Most are less than one inch long.