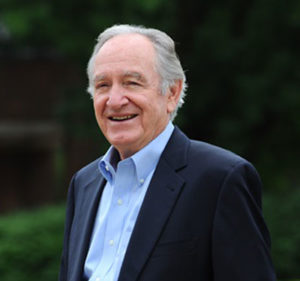 The woman who is the world’s first and only armless pilot will be flying over the Washington, D.C. area this morning with former Iowa Senator Tom Harkin as her copilot.

Jessica Cox, who was born without arms, is a motivational speaker and disability rights advocate. The 80-year-old Harkin served as a U.S. Navy pilot during the Vietnam War era and he’s still an active, licensed pilot.

“We’re just going to go up and fly around for a while and come back and land,” Harkin says. “The whole thrust of this is to celebrate the 30th anniversary of the Americans with Disabilities Act and to illustrate that we shouldn’t be putting limits on persons with disabilities. People with disabilities can do just about anything they want.”

Harkin was the chief architect of the ADA, which was signed into law on July 26th of 1990. The Iowa Democrat, whose brother was deaf, is headlining a virtual rally on Sunday via Instagram and Twitter. Harkin says the goal of the event is twofold, to mark the anniversary of the landmark legislation.

“But also, just a rallying cry to look ahead at what more needs to be done to make the four goals of the ADA a reality,” Harkin says. “That is full participation, equal opportunity, independent living and economic self-sufficiency.” He served in the U.S. Senate from 1985 to 2015 and Harkin calls the passage of the ADA his greatest professional achievement.

“Without a doubt, that’s the one thing I’m proudest of in my life,” Harkin says. “It wasn’t easy, it took a long time, but we got it through. It also illustrates how people of good will can work together. This was a bipartisan effort. We had Senator Dole, of course, and President George H. W. Bush was wonderful. He never wavered in his support.”

Former Kansas Senator Bob Dole, who turned 97 this week, will also be taking part in Sunday’s virtual rally. While the ADA broke much ground on behalf of people with disabilities, Harkin says there are two things, in particular, he would like to have included. First, he says personal attendant services should have been included as part of the reasonable accommodations for businesses to meet when they hire people with disabilities.

“A second thing I wish we had done is straighten out the mess that we still are plagued with today in Medicaid and disability compensation,” Harkin says. “If a person who’s disabled goes to work, they lose all of their support system, and that keeps a lot of people with disabilities from seeking employment.”