You are here: Home / News / An Iowa tradition since the 1930s, roadside small game survey is scheduled this week 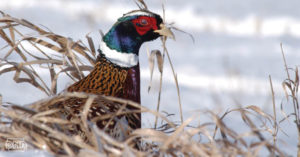 The annual roadside survey for small game animals starts this week as staff with the Iowa Department of Natural Resources drive routes across the state, looking for a variety of critters.

“Last year, the counts were down a bit. We had a tougher winter and it was a wetter spring,” Bogenschutz says. “Coming into this year, we had a fairly mild winter which means we probably had fairly decent hen survival through the winter.”

Bogenschutz says the year ahead may be particularly promising for hunters, especially when compared to 2019.

“Spring was cool but it was also one of the driest in almost ten years, that’s usually a good sign in talking about our nesting wildlife,” he says. “A lot of folks are excited about what we’re going to see in the count. Everybody’s expecting things to be up.”

Bogenschutz says the work of the counters in the survey should not be impacted by COVID-19 as they’re staff members, not volunteers, and they’ll be driving their routes themselves. He anticipates a busy fall hunting season.

“I know our fishing license sales are up and our spring turkey hunting license sales were up,” he says. “I think it’s just because of the COVID thing. A lot of people aren’t working so outdoor recreation is one of the ways they fill the void and maybe that’ll continue this fall.”

The results of the roadside survey will be released by early September. The count started in Iowa in the 1930s.