You are here: Home / News / Iowa advocate for people with disabilities discusses updates to ADA 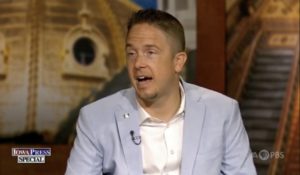 A member of the city council in Sioux City says it’s time to revisit parts of the Americans with Disabilities Act that exempt certain structures from accessibility requirements. Alex Watters says he never anticipated becoming an advocate for disabled people.

“I actually had an accident 16 years, two weeks into my freshman year of college, where I dove into 18 inches of water, snapped my neck…had to do six months of rehabilitation at a hospital,” he says. “I had my whole life kind of turned upside down and had to find out how to navigate a body I no longer recognized.”

Watters returned to and graduated from Morningside College in Sioux City where he says school administrators worked with him to reschedule classes in historic structures on the campus that were not accessible to his wheelchair. Watters says others in his situation aren’t as lucky.

“There are a lot of institutions or different areas, companies, whatever that have those historic structures that say: ‘Well, you know it is historic, so we don’t want to alter it. We don’t want to change that or weaken the integrity of the building,’ and so people are excluded from the conversation,” Watters says, “and I think that’s unfortunate.”

The Americans with Disabilities Act did not address access issues in commercial air travel, but a separate law forbids discrimination on passenger jets. Watters says there is a business opportunity for airlines that do more to expand accessibility.

“If there were more abilities for me to utilize my wheelchair and drive into the plane and lock down safely, think about the brand loyalty,” Watters says. “…That brand loyalty will mean so much to those individuals with disabilities. We’re the largest minority group in the United States. Why wouldn’t you want to capitalize on that market?”

Watters says he has to be carried onto planes and that’s risky for him and the people who are carrying him. Watters made his comments during an Iowa PBS Special marking the 30th anniversary of the Americans with Disabilities Act.