You are here: Home / Health / Medicine / The rules are relaxed for giving blood and the timing couldn’t be better 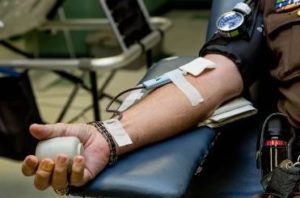 Thanks to changes in federal rules, more people are now eligible to give blood, and more donors are needed as hundreds of Iowa blood drives have been cancelled because of the pandemic.

Pete Lux, director of donor services at the Davenport-based Mississippi Valley Regional Blood Center, says under the old rules, people who lived in Europe for three months or more were not allowed to donate blood in the U.S.

“People who were deferred for living in Europe on a military base, that’s no longer a deferral,” Lux says. “We want to make sure we can contact those people, get them back in our systems and get them back to getting calls and reminders.”

The regulations were put in place years ago due to Mad Cow Disease, but the Food and Drug Administration has lifted restrictions for certain countries. The United Kingdom, Ireland, and France are not on the list.

Other eligibility rules have changed. For example, those who’ve had a tattoo or piercing -are- allowed to donate blood after a three-month wait instead of a year. The same waiting period applies to those who may have been exposed to HIV.

The blood center needs to collect about 3,500 units of whole blood per week. Now, it’s only collecting 3,200 due to the pandemic and Lux says they can’t store whole blood indefinitely.

“Not really. It’s good for six weeks, so we can work that far out and plan promotions and everything around that expiration date,” Lux says. “My boss calls it trying to catch a falling knife.”