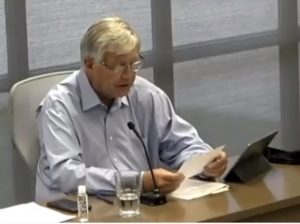 The board that governs the three state universities has approved $65.4 million in budget cuts. Board of Regents president Michael Richards warned this may not be the end of the cuts.

“We certainly anticipate that the detailed plans that our universities have made public for the fall 2020 semester will continue to be refined, added to and adjusted,” Richards said, “if need be.”

“We have been living and working in very uncertain times over the past several months and that uncertainty remains with us and will continue for several more months,” Nook said. “…As a university, we have become comfortable being uncomfortable.”

“Shutting down was one thing. Reopening is another,” Harreld said. “Every pocket of our university has been impacted by this virus.”

The board approved early retirement incentives at Iowa State and ISU president Wendy Wintersteen estimated 100 faculty positions will be reduced through attrition.

“We are addressing unprecedented revenue losses due to COVID-19: projected enrollment declined, reduced state appropriations,” Winterstein said. “…and the increased cost of preparing for the fall semester with a prioritization for health and safety.”

“I have been personally very impressed by our institutional leadership being willing to take pay reductions to help with the economic challenges our schools are facing,” Richards, the Board of Regents president, said. “…Everything we can do makes a difference in this pandemic.”

In a news release, the board announced that due to the volatility surrounding college sports, the athletic budgets for the Hawkeye, Cyclone and Panther programs will be reviewed in September. A decision on the next phase of improvements to Iowa State’s Hilton Coliseum was delayed as well.