You are here: Home / Business / River towns face double whammy from 2019 floods and now the pandemic 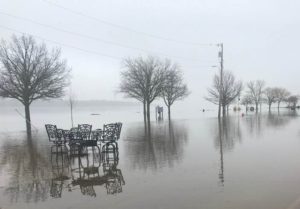 Record flooding in 2019 in the Quad Cities.

A year after record floods washed over the region, some Mississippi River communities are struggling financially during the pandemic.

Bettendorf Mayor Bob Gallagher co-chairs the Mississippi River Cities and Towns Initiative. He and other mayors are urging Congress to pay cities for what they’ve spent to fight COVID-19, plus revenue lost due to lockdowns.

Gallagher says some river towns have lost up to 30-percent of their annual revenue, as well as personnel.

“We also have a handful in a couple of different departments who have retired as a result of COVID or maybe it was their life plan,” Gallagher says. “We have not filled those positions, in fact, we’re down eight folks at our family museum right now. We have not had to make any real furloughs, especially in public safety.”

Colin Wellenkamp, the association’s executive director, says most cities still have not received federal payments for fighting the record flood from 2019, let alone from this year’s pandemic.

“We’re averaging now a 24-month wait time on FEMA reimbursements,” Wellenkamp says. “Cities that sustained damage in the 2016 floods just got reimbursed a little while ago, so, we’re expecting a long haul on that.”

Gallagher and the other mayors are all concerned more job cuts and furloughs will be needed if Congress doesn’t provide any funding. Members of the initiative are also asking for more resources for COVID-19 testing and PPE for schools.