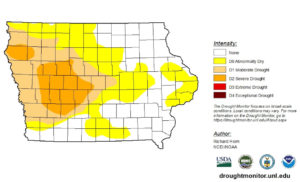 The Iowa DNR’s Tim Hall says the negative outweighs the positive in the report.

“We had a little bit of improvement in one part of the state — but mostly we had degradation or increasing drought in other parts of the state,” Hall says. He says the driest area continues to be in western Iowa.

“It’s centered around Carroll, Greene, Guthrie and Audubon County and then in the partial counties around there,” Hall says. “Kind of that part of the state, there’s a little bit of D-2 drought in Plymouth County up in northwest Iowa. So, those two areas together are the worst parts.”

Hall says the dry conditions have started to spread to the east. “Now there’s exceptional dryness as far east as Linn County, and then also along the river,” according to Hall. “So we’ve got about half the state, a little over half the state is shown in some form of dryness and drought.”

Hall says the impact of the dry areas can also be seen in satellite images of the crops.
“There’s a tool out there called VegDRI — which also comes from the drought monitor folks — and they’re actually looking at visual indications of stress in vegetation. And thatVegDRI map lines up pretty closely with where we’ve seen the precipitation deficits,” Hall says.

He says the good news for the western areas that are dry is the impact right now isn’t hitting water supplies. “I think because of the exceptionally wet couple of years we had coming into this year we’re still doing okay on the groundwater side. Right now it’s primarily an agricultural surface water phenomenon,” he says.

Hall says the precipitation deficit is a concern because we are soon going to be heading out of the wettest months of the year, and could be behind in groundwater going into the winter.