You are here: Home / Sports / Governor: softball and baseball seasons a success 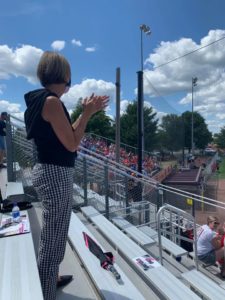 Spring sports were cancelled due to the pandemic, but Governor Kim Reynolds gave the go-ahead for this summer’s high school baseball and softball seasons.

The schedules were shorter, but Reynolds says that shouldn’t diminish the results. “Although Iowans might have mostly heard about those schools that finished their seasons early because of Covid-19,” she says, “the statistics in both baseball and softball show an unqualified success.”

Iowa is the only state in the country to have had organized high school sports this summer and the governor says she’s heard from Iowans about their experiences. “Recently I was in Sioux Center and I had a young man who was a high school senior come up to me and he thanked me for letting him play baseball this summer,” Reynolds says. “He said it really meant a lot to him, as a senior, and to his teammates to get to play this last season.”