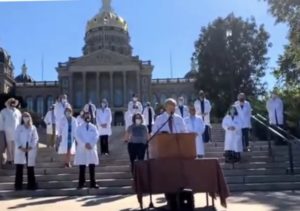 Physicians from around the state gathered on the Iowa Capitol steps this weekend to call on Governor Reynolds to either issue a statewide mask mandate — or at least allow local officials to require face coverings in public places. Dr. Brian Privett, an ophthalmologist in Cedar Rapids, president of the Iowa Medical Society, spoke at the event.

“Our message is clear,” he said. “The benefits of wearing masks and mandating the use of masks far outweigh the downsides.”

Austin Baeth, an internal medicine doctor from Des Moines, said Iowa is one of only two states in the country without a public policy on masks.

“Iowa is on the cusp of catastrophe and we need to do everything we can do now,” he said. “…Face masks work.”

Iowa Public Health Association Lina Tucker-Reinders said too many Iowans are not wearing a mask in public.

“We, your public health and health care communities of Iowa, are calling on Governor Reynolds to do the right thing: ‘Support a mask mandate, ideally statewide,” Tucker-Reinders said at the rally, “but minimally allowing local authorities to have local control.'”

Last Thursday, Reynolds said “a lot” of states with a mask mandate aren’t enforcing it.

“If you look at some of the states and the timelines that they actually issued a mandate, the cases are still rising, so you know it’s just there’s not a silver bullet,” Reynolds said. “There’s no single answer.”

Reynolds told reporters she’ll continue with a public service campaign encouraging Iowans to “mask up” as an effective way to slow the spread of Covid-19, but the governor said as medical professionals say mask use is effective, “there’s people who would tell you just the opposite.”