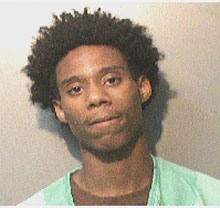 (Update) Ankeny Police say Logan has been taken into custody.

Ankeny police are looking for a man for questioning in the death of a 17-year-old woman and her unborn baby.

Police found Mia Holmes of Ankney with a gunshot to the chest at a hotel on the south side of town near the interstate. She died at the hospital.

They are looking for 18-year-old Donault Logan of Des Moines. He is believed to be driving a red 2006 Saturn Vue that had no license plates.