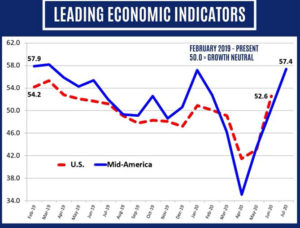 Goss chart of pandemic impact on the economy.

Iowa’s economy is gradually recovering from the deep drop caused by the pandemic, according to the monthly Creighton University survey of supply managers and business leaders in Iowa — and in eight other states.

Creighton economist Ernie Goss says the Midwest region overall is inching back toward prosperity, though he says it’ll be a long climb. The overall index is based on a 0-100 scale, with 50 being growth neutral.

“The overall index improved significantly to 57.4, well above growth neutral from 50.3 in June,” Goss says. “Things are looking much better. We’re still not back in terms of jobs from pre-COVID-19 levels but we’re moving in the right direction. This was as good a survey as we could have hoped for.”

Iowa’s overall index rose above growth neutral during July, reaching 50.9. That’s up from 47.1 in June. Since the onset of COVID-19, Goss says Iowa has lost 108,000 jobs, or almost 7% of its total employment. The Creighton surveys point to continued job losses in the months ahead, he says.

“The region is down about 900,000 jobs,” Goss says. “Most of the states and the overall region are down about six-and-a-half percent from the February numbers, and that’s, of course, pre-COVID-level numbers.” While a few businesses reported a financial upturn during recent months, the vast majority were badly hurt by COVID-19 and for some, the troubles have remained or worsened.

“Eighty-percent of the manufacturers reported negative impacts and 55% reported hiring reductions and that compares to 49% in April,” Goss says. “We’re moving in the right direction even in terms of hiring but we’re still not back to where we need to be.” Goss says 70% of manufacturers surveyed reported shipping problems during July, with both incoming and outgoing products, compared to 51% with shipping troubles in April.

Also, he says 48% of those surveyed had worker absences during July, compared to 61% in April.