You are here: Home / Education / Iowa governor says no credit for online instruction without state permission 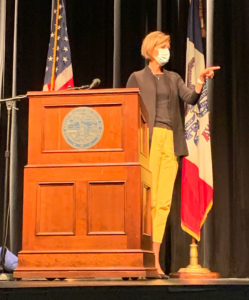 Governor Kim Reynolds says in-person classes are to be the primary mode of educating Iowa’s K-12 students this school year and students will not get credit if their schooling is conducted online without state permission.

“Schools that choose not to return to school for at least 50% in-person instruction are not defying me,” Reynolds said during a news conference last this morning. “They’re defying the law.”

On Monday night, Urbandale’s school board voted to continue online classes for a year-round school that state officials ordered to start in-person classes this Friday. And Waukee school officials issued a statement, saying state law gives them local control over these decisions. During today’s news conference, Reynolds strongly pushed back.

“We’ve heard from countless experts, pediatricians, social workers, mental health providers, the CDC,” Reynolds said, “that what’s best for kids is for them to be in school and in the classroom.”

Reynolds told reporters the “vast majority” of Iowa school are planning to start the school year with in-person classes, while “a handful” of districts are not following her guidance.

“We’re going to continue to do the outreach and work with them and see if we can’t get them to comply,” Reynolds said. “It is the law.”

If Urbandale, Waukee, Des Moines, Ames and Iowa City districts begin this August with remote learning without state officials’ approval, the governor said students will not get credit for those days of on-line instruction. The governor also is accusing the media of stoking fears that children will contract the virus at school and teachers may die of it.

“What we’re doing to these kids is unconscionable, the fear that we’re instilling in them,” she said, “and so I think we all have a responsibility to do better including me and we can and I’m working on it every single day because come hell or high water, we’re going to get through this.”

The governor indicated school administrators in districts that begin remote learning without state approval may lose their license. Waukee, one of the five districts at the center of this controversy, is led by superintendent Brad Buck, who served 17 months as Iowa Department of Education director for Republican Governor Terry Branstad.

“The kids need to be in the classroom,” Reynolds said today. “…We’re in a much better position than we were when schools were shut down. Kids have not had instruction for over five months.”

Reynolds indicate state officials will meet with administrators from the five districts that are so far sticking with plans for remote learning in hopes of resolving the impasse.

The governor’s spokesman said a state-maintained website will list the 14-day rolling average of positive Covid-19 cases in every school district. Once the so-called positivity rate reaches 15% and at least 10% of students are absent, district officials may seek state permission to send all students home and shift to online instruction only for 14 days.