You are here: Home / Education / Return to campus includes a COVID-19 test for ISU students 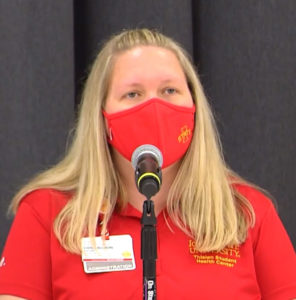 Students at the three state schools are starting to move back into the dorms this week for the beginning of the fall semester.

There are usually no tests given in the first weeks — but Iowa State University COVID-19 health coordinator Kristen Obbink says that has changed this year. “Our students moving into our residence halls and campus apartments will first be getting a COVID-19 test at Lied Recreation Center,” Obbink says.  She says the testing is being conducted by Iowa State’s public health and command teams.

ISU Student Health Center director Erin Baldwin says they felt it was necessary to know where they stand. “Testing is just one element of our strategy, so we felt like since we have a large group of students who are moving into our residence halls it was important to have that testing as we introduce our students to congregate housing,” Baldwin says, “realizing that it is a point in time with testing and it is just one part of the strategy.”

The housing will be limited to two roommates, and they will alternate the move-in times. Associate Director of Campus Life, PeteEnglin, talked about the a plan for dealing with positive tests.

“First roommate moves in gets their test results — they’re negative. The second roommate comes in gets test results — and it might be positive. The positive person would go to isolation and then the other roommate would go to quarantine, ” according to Englin. “And then we’ve secured a moving team that actually moves whatever the student wants to take with them to either isolation or quarantine. And then when they are cleared to return to their permanent assignment — the moving team would help them move too.”

Englin says they are keeping things very flexible for parents and students who change their mind. He says anyone can cancel their room contract through August 17th without any penalty to give them the choice to do what they want to do.

Baldwin says they do have plans in place to deal with what they see in the numbers.
“With our main goal of trying to intervene and mitigate those things early — so that we can have the biggest impact on public health — with the lowest amount of impact on our overall university operations,” according to Baldwin. “We’ve really tried to provide a really flexible plan that can be tailored to the situation at hand as we continue to monitor those things over the course of the semester.”

Englin says many of the college kids have been doing the things that college kids do and the measures they are taking at ISU will actually be safer for them.