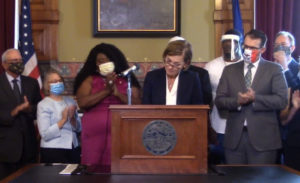 “This is a cause on which so many Iowans have worked on for years. It boils down to our fundamental belief of redemption and second chances,” Reynolds says. The order restores voting rights to about 40,000 people statewide, though it won’t apply to those convicted of murder, manslaughter or serious sex crimes.

Reynolds had advocated for an amendment to the Iowa Constitution to make the change — but indicated she would sign the executive order after that process stalled in the Iowa Legislature.

“Iowa holds the unfortunate status as the only state in the country that prohibits anyone convicted of a felony from voting or holding public office for life — unless they petition the governor to restore those rights,” Reynolds says. “That creates the potential for uneven justice. It means people who have served their sentence and are seeking to get their lives back on track permanently are prohibited from one of the most basic rights of citizenship unless a single individual decides otherwise.”

Reynolds says lawmakers still needs to approve the amendment so it can be voted on by Iowans. “An executive order is at best a temporary solution,” according to Reynolds, “it can be changed with the stroke of a pen by the next governor. Which is not good enough. Something that is fundamentally right should not be based on the benevolence of a single elected official.”

Betty Andrews, who heads the NAACP of Iowa and Nebraska, thanked the governor for keeping her promise to sign the order.
“This is extremely important. The right to vote is a fundamental act of citizenship,” Andrews says. 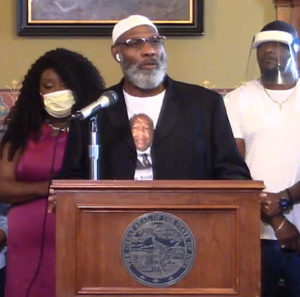 Reynolds says she wanted to let that discussion continue while the legislation was in the works. “That’s just part of the process, I was trying to get it passed through both chambers and keep things going. And through that negotiation process that was one of the things we needed to do to keep the process moving. And that gave us an opportunity to continue to talk about that and see if we could come to different solutions,” Reynolds says. “That’s been something that I have always advocated for — so it is not a change in my position.”

The governor says she has talked with the groups which pushed for the change and they plan to have a bigger celebration in the future.