You are here: Home / News / Smoldering fire at Spencer’s city landfill appears to be out 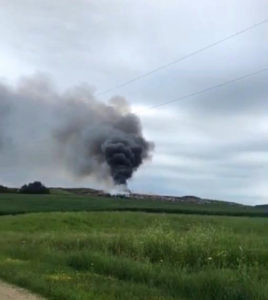 The public works director in Spencer says it appears the fire at the city-owned landfill near Graettinger has been extinguished.

Fire departments were first dispatched to the scene a month ago. Spencer Public Works Director Mark White says fire crews were called out two other times when smoke was seen rising from the landfill.

White says Spencer city staff has spent quite a bit of time at the site, digging material out of the burn zone and hauling in clay that’s been spread on top.

“It’s all been in the same spot, so most likely it’s something deep within that’s been smoldering for quite some time,” White says.

A report about landfill fires prepared for the State of Missouri indicates more than 8400 fires are reported at landfills in the United States each year and the vast majority are contained before the landfill is compromised.