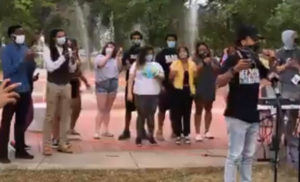 Black Lives Matter organizers Matthew Bruce said the order is “a big step forward” for tens of thousands of Iowans who gained the right to vote.

“It shows us that this works, no matter what anybody else got to say about it,” Bruce said, as the crowd cheered, “direct action works.”

Chelsea Chism-Vargas, a community organizer in Des Moines, called on the governor to help get felony charges dismissed against Bruce and others who were arrested during the group’s protests.

Several speakers expressed frustration they had not been invited to the governor’s office to see her sign the executive order. Others accused older black leaders in the community of taking a go-slow approach on racial justice issues. Yena Balekyani said the black elders who attended the event in the governor’s office yesterday should publicly apologize.

“Photo ops are not going to save black people, ok? Photo ops don’t change policy. Action does,” she said. “Action! We want action!”

Black Lives Matter protesters also had an online presence during the Des Moines City Council’s virtual meeting. The group opposed the city’s purchase of nearly $100,000 worth of ammunition for the Des Moines Police Department.