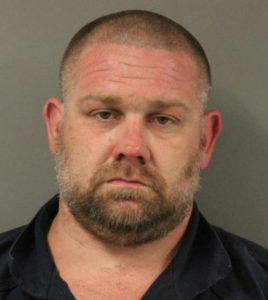 (Update:)  The Fort Dodge man wanted on a first-degree murder warrant in the death of his wife was arrested this morning with the help of a police dog.

Webster County authorities were notified of a suspicious male in the area of Webster County Road P-59 and Quail Avenue near Fort Dodge at 6:50 today. When officers arrived on the scene, the man had left the area but was caught a short time later inside a shed with the help of a police dog.

Forty-three-year old Justin Hurdel surrendered to authorities. He was taken to a Fort Dodge hospital for treatment of injuries received prior to the arrival of law enforcement. Hurdel is accused of murdering his wife 38-year-old Maggie Hudel at her home on Wednesday afternoon.

An arrest warrant is issued by the Fort Dodge Police for a man accused of killing his estranged wife.

Forty-three-year-old Justin Christopher Hurdel is wanted on a charge of first-degree murder. He is accused in the shooting death of 38-year-old Maggie Hurdel. Fort Dodge Police, Webster County Sheriff’s Office and the Iowa Department of Criminal Investigation are investigating the homicide that occured shortly after 2 Wednesday afternoon at the residence.

When authorities arrived, they discovered the body of Maggie Hurdel. Justin Hurdel is described as being 5-feet 8-inches tall an weighing approximately 260 pounds. Police say Hurdel is considered to be armed and dangerous. Anyone with information is asked to call Fort Dodge Police.