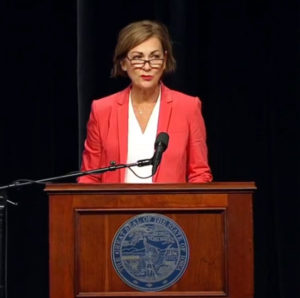 The guidelines released last week indicate at least 10 percent of students must be absent in a district – and a rolling, 14-day average of Covid-19 tests must show at least 15 percent of residents in the county or counties in which the district is located must be ill. Seven counties now meet or exceed that 15 percent threshold.

Reynolds today indicated, for example, that schools in Webster County, with a current 22 percent positivity rate, would be unlikely to get approval to shift to an online-only option.

“They have, as you are very well aware of, an outbreak at the state prison there,” Reynolds said, “and that is in a completely contained environment.”

The governor said confirmed outbreaks at businesses or institutions like a state prison are “a key metric” that may suggest closing a school for 14 days is not the right decision.

“The community context will be so important for schools to consider,” she said.

And the three school districts in Webster County — Fort Dodge, Prairie Valley and Southeast Webster — should be planning to begin classes in-person this month, according to the governor.

“I think that they should make every effort to get those kids back to school,” Reynolds said. “…We have kids that are practicing football right now…and they’re figuring out a way to do it safely and responsibly.”

Iowa State Education Association president Mike Beranek issued a statement in response, saying “there is zero evidence the metrics that Governor Reynolds is using to determine whether schools are allowed to operate remotely are based on real science.

“The community circumstances that make it even harder for a school district to successfully win a waiver are just another line in the sand that keeps moving,” he said.

Reynolds indicated teachers and school staff should be allowed to work if they have been around someone who tested positive for the virus, but are not showing symptoms.

Dr. Caitlin Pedati, the state medical director, said if there are teacher shortages, teachers may volunteer to work even if they’ve been potentially exposed to Covid.

“We can do things to safely allow some of those critical workers to return to roles,” Pedati said, “but it includes things like monitoring of symptoms and temperature twice a day, using a face mask.” However, students with or without symptoms will be asked to quarantine for 14 days if they’ve been around someone who tests positive for Covid.

Beranek, president of the state teachers’ union, said like all working Iowans, teachers have a right to a safe and healthy work environment.

“If calling teachers ‘essential workers’ is just an effort to require them to work in unsafe working conditions — “as was the case with our meatpacking industry — then we are not on board,” Beranek said.

Reynolds began today’s news conference by featuring educators from a southern Iowa district, to emphasize plans for getting kids back in the classroom. Joel Petersen is superintendent of the Cardinal Community School District in Eldon, where about a thousand students are enrolled.

“We want to start with bringing our kids back to schools because we need to see them,” he said, “..and we haven’t seen them since March.”

Petersen said the district is prepared to offer “a quality virtual option,” if parents choose that for their kids, but he said that can’t replace 100 percent in-person instruction.

“I worry about not having eyes on kids. We know from the research that abuse issues are often found or reported at schools,” he said. “…Making sure that they get a quality meal, making sure that their mental health is important, making sure all those basic needs are being met and then we focus on reading and math — those are the things that can’t happen if we don’t have our kids at school.”

Bethany Short, a middle school teacher, in the Cardinal district works with students who struggle with social and emotional regulation, was also on stage with the governor today.

“As an adult, I crave the structure and the routine and the procedure behind going to school,” she said. “You know some kids act relutant to go back…but I truly believe that face-to-face learning is what’s best for our students right now.”

Short said she’s contacted all the parents of her students and all are choosing to send their kids back to the classroom on August 26th, when school is scheduled to start in the Cardinal district.